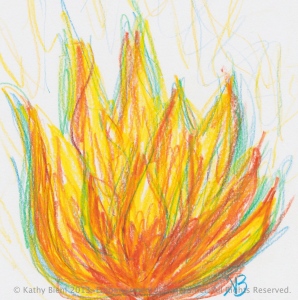 Anyone noticed how rash, angry, outrageous and inescapable Donald Trump has been this summer? It’s been hard to miss, right? There’s an astrological reason for it. Actually, maybe five. And some of it is coming to a head, big time, at the Leo New Moon August 14.

First, the build-up:  (1) Radical, rebellious Uranus in shoot-first, aim-later Aries is in an open flow to Trump’s Sagittarius Moon. (View his birth chart at Astrodatabank.) That Moon placement is prone to foot in mouth disease by itself; with the Uranian contact any semblance of controls has shattered and a loose cannon has been unleashed, reckless, combative, unrepentant.  That’s been pumped up to extremes by Jupiter in Leo, traveling through Trump’s 12th house, the house of self-undoing and what I call “the back of the head,” the part of the self that is hidden to the conscious personality. The pumping up hit new heights at the end of June, when Jupiter trined Uranus. Since then Uranus has come within a degree of trining Trump’s Moon — think of that as going to the brink of the boiling point without quite reaching it. It’s making him a human Molotov cocktail, uncontrollable to the powers that be (cowering over in Pluto in status-quo Capricorn).

(2) Add to this the activity around Trump’s Leo ascendant. If the birth time at Astrodatabank is correct, Trump has 29 Leo rising, the very last degree of the sign of the king, right on top of Regulus, the fixed star of royalty. This translates into a showy personality and larger-than-life sense of self and entitlement. Two important transits have been whipping that up:  (a) a square from Saturn retrograding in Scorpio, all summer long, in Trump’s 4th house of home and security, which has been dredging up fears and beasties (one case in point: the immigration rhetoric) and (b) Venus retrograding in Leo, back into his 12th house of the unconscious and self-undoing, and squaring that Saturn in Scorpio (see, e.g.,  the inflammatory comments about women).

All this activity is going to escalate in the next two weeks. A fire storm is in store for Trump at the Leo New Moon on August 14, which will form a grand trine in fire with his Sag Moon and transiting Uranus. This is igniting within him and fueling public displays that may top any we have seen yet. Retrograde Venus is right next to the Sun and Moon, which adds to the mix issues of the subconscious, self-undoing, women, money and values. On Saturday the 15th, Venus and the Sun meet at the spot Jupiter occupied when he made his last exact trine to Uranus at the end of June, so expect something from that time to re-ignite. Between August 19 and 21, Venus contacts Uranus in two effortless ways (trine and parallel), which promises more fireworks, surprises and sudden changes.

Sounds like a formula for spontaneous human combustion. Or self-immolation.

Expect the ramifications to become ever clearer in September, when Venus and Saturn go direct and ultimately change signs. By November Saturn crosses Trump’s Lilith. I don’t normally pay attention to Lilith, but mention her now because as Adam’s first wife, she does represent the scorned, devalued woman. There will be consequences.

Keep Astro-Insight going. Please contribute a cup of coffee, or maybe some sunscreen? Make a donation via PayPal to kbiehlATempowermentunlimited.net (and replace “AT” with @). Thank you!

© Kathy Biehl 2015. All Rights Reserved. You may forward this article as long as the copyright notice is intact. No part may be used or reprinted without my prior written permission. Karma, ya know.

3 thoughts on “Astro-Politics: Trump’s on Fire”