Impulses that have been smoldering all summer catch fire with August’s Leo New Moon. The event takes influences from two overlapping cycles, rolls them into a fireball and hurtles them — and us — forward.

Under normal circumstances, the Leo Moon gives a boost to our egos, playfulness and need for recognition and attention. This time around, the Moon is not merely priming our inner spark. It is     pouring desire and willpower into that spark and catalyzing dramatic developments. 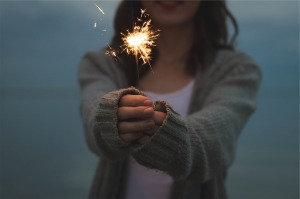 The catalyst angle comes from the New Moon’s tight, easy flow to Uranus, cosmic agent provocateur. Pressures and impulses from the last three years, and from the end of June in particular, are catching fire. (Again.) This link imbues the New Moon with the radically liberating, individuating end of the change imperative that has rocked the foundations of our lives since 2012, as the unforeseeable and perspective-altering (Uranus) clashed with the unavoidable and transformational (Pluto).

This summer is taking us through a corridor between constant upheaval and the new platforms to come this fall. With this Moon, we’re hitting a section with tripwires, that will break us from remaining tendrils of the past and shoot us more and more toward our individual, distinct path.  The tripwires were set at the end of June (the exact date was the 27th, but the days on either side could also play a role). That’s when Jupiter warmed up the spot now being occupied by the Sun, Moon and Venus.

All of them are in an open flow with unpredictable, mind-blowing Uranus, which will continue for the Sun and Venus into next week. A spark from in late June will catch fire now. (The ends of last March and September may fuel the story line, too.)  The traveling flame will hit the end of the fuse and set off the dynamite. The next stage of the saga will erupt. Another shoe or five will fall. Another can of spinach will appear — a case of it, more likely — and send us into action, fast, furious and double-time.

That’s the first cycle pouring into this New Moon. The second involves the Moon’s desire and willpower combo. That comes from the New Moon’s planetary honor guard: Venus, ruler of all we desire and value (love, money, beauty, creativity), which has just crossed over the Moon and the Sun, and Mars, ruler of our drive, which is just inside the doorway to Leo. Venus is infusing the New Moon with what she wants (which is to say, what we want). Mars is gearing up to go after what she wants, in a high energy, compatible and ever so dramatic way. (Results are likely around September 1, when the cosmic lovers have a hot date.)

Recent events are molding that desire and willpower combo — what Venus is telling the Moon she wants, and the follow through to come from Mars. Some of those requests reflect experiences, realizations and changes of heart since July 25, when Venus began her current retrograde. She’s been taking us on a journey of self-rediscovery, through memories and reminders of — and contact with — people, places and things that were once important to us. Old friends, old loves, old jobs, old pastimes, old hangouts, old music, old haunts from childhood and teenage years — look at what has floated back onto your radar and into your life lately. Some have been welcome, some have been surprises, and all have brought back a taste of the way we were.

The visitations have turned up parts of yourself, maybe to remind you of how you once experienced life, maybe to come back in for reincorporating in some way. (The most beautiful example I’ve encountered is a friend going back to a secluded spot on a high school campus, where he used to sit and clear his mind before going onstage, and experiencing the same sensation of quiet and centering he had decades ago.)

All this information fuels the New Moon. There’s more to come, of course, as Venus continues her retrograde through the first weekend in September. For now, though, we have plenty to go on. We have an updated version of what we want. (Still in progress, sure, but the punch list is workable in its current state.) We have growing drive and motivation to go after it. With Uranus in the mix, who can say exactly where or how this New Moon will send us.

Triggers are coming at unexpected times, from unexpected sources, in unexpected ways. They’re firing in us and around us. They’re catapulting us further from the rubble of the past three years and toward the next stage in rebuilding our foundation. They’re awakening us to situations that invalidate us or interfere with our shining, and inspiring-to-infuriating us to head elsewhere. Another round of booster rockets are going off, dropping away, and sending our own little capsules further and further into the next adventure.

To work with this energy: Think about, then write down intentions for this phase. Specifically address either or both of the two cycles if you like (the past three years, particularly leading to the end of June, and the Venus retrograde this summer). Add fire to what you’ve written. Fold the paper and place it under a lit candle, or set fire to the paper.

Read my analysis of what this Moon means for Donald Trump.

Curious how this is affecting you?  Book a session with me!

Readers call Astro-Insight “ridiculously accurate” and “on the nose.” Agree? Keep it going with a cup of coffee, or maybe some sunscreen? Make a donation via PayPal to kbiehlATempowermentunlimited.net (and replace “AT” with @). Thank you!

© Kathy Biehl 2015. All Rights Reserved. You may forward this article as long as the copyright notice is intact. No part may be used or reprinted without my prior written permission. Karma, ya know.